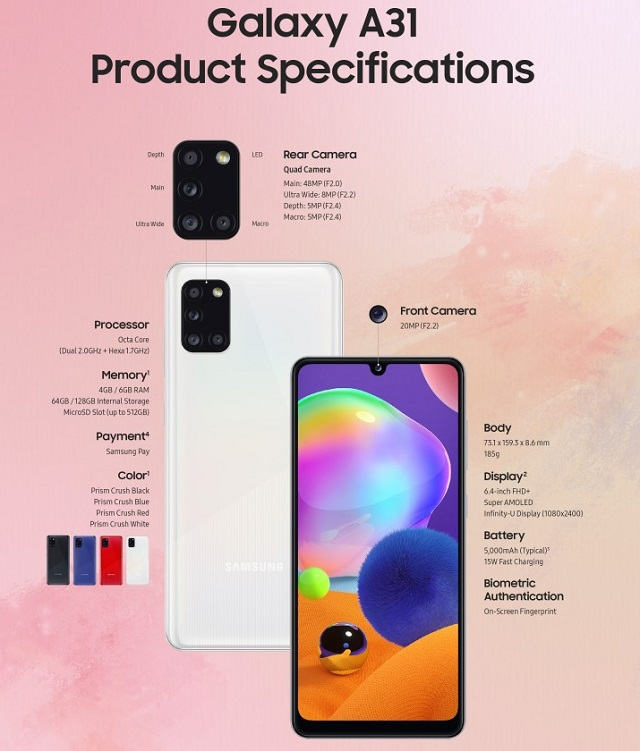 Samsung Mobiles has officially launched Galaxy A31, the latest Samsung smartphone in the popular and well established Galaxy A series.

New Samsung Galaxy A31, a successor to Galaxy A30s is adorned with a 6.4-inch full HD+ Infinity-U AMOLED display. It’s with 20:9 aspect ratio. It’s got an in-display fingerprint scanner and there is U shaped notch at the top of the screen which houses a 20 mega pixel selfie camera with f/2.2 aperture. This device is 2mm narrower than the recently launched M31 and fractionally thinner.

Coming to the rear camera department, the latest Samsung mobile has four rear cameras aligned in a square setup on the left of the rear side. It’s made up of the main camera 48MP (f/2.0), 8-megapixel ultra-wide-angle lens with f/2.2 and 5 MP for depth sensor(f/2.4) for portrait shots, and a dedicated 5 MP (f/2.4) lens for the micro shooter.

Under the hood, it’s powered by an octa-core processor running the Mediatek Helio P65 chipset with 4 GB RAM coupled with 64 GB of internal storage. There is another variant with 6 GB RAM and 128 GB of storage. As usual, there is a micro SD card slot that supports storage up to 512 GB.

It’s backed by a 5000 mAh battery which comes with 15W fast charging and it runs on  Android 10 version out of the box. It gets different colors Prism Crush White, Prism Crush Blue, Prism Crush Red, and Prism Crush Black. Sadly there is no word on the pricing information but it will revealed soon.