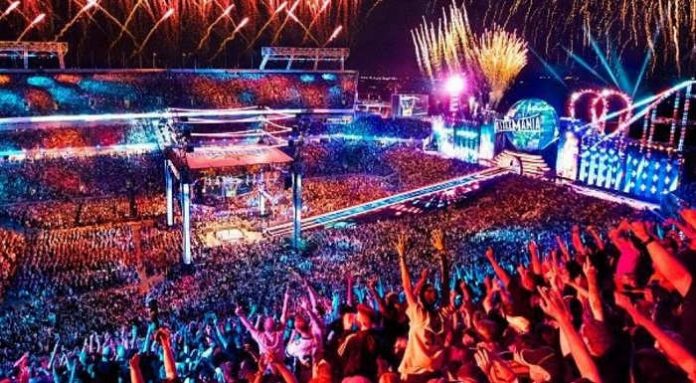 World Wrestling Entertainment (WWE) has announced the Wrestlemania 36 date. It was scheduled to held on April 5th, 2020 at Raymond James Stadium in Tampa, Florida but due to Coronavirus the event has some modifications. It’s a flagship WWE event held yearly in the first week of April and it’s the sixth most valuable sports brand in the world, according to Forbes. Now as announced by WWE, the event will take place on Saturday April 4th and Sunday 5th April inside the WWE Performance Center in Orlando. There will be no crowd for this WWE PPVs.

Several superstars from RAW, SmackDown and 205 Live brands will compete for the prestigious WWE titles as it will be on the line. The event will be witnessed by more than 80,000 fans live and millions of people through the WWE Network broadcast.

WWE will celebrate its 36th-anniversary of Wrestlemania PPV event alongside WWE fans in Florida. It’s one of the biggest upcoming Pay Per View event in terms of attendance count at the stadium.

Raymond James Stadium is a multi-purpose football stadium and its home for Tampa Bay Buccaneers team of National Football League (NFL). It has a capacity of 65,618 and can be expanded to 75,000.

The Wrestlemania 2019 was held at MetLife Stadium in East Rutherford, New Jersey on April 7th. It was an eventful night with several title changes and a few disappointing retirements.

Kofi Kingston became WWE Champion for the first time as he defeated Daniel Bryan and Seth Rollins won his first Universal Championship by defeating Brock Lesnar. Becky Lynch defeated SmackDown Women’s champion Charlotte Flair and RAW Women’s Champion Ronda Rousey in a Winner takes All triple threat match to win both the championship. Kurt Angle and Batista were ended up losing their farewell match in WWE. It ran for more than 7 hours of entertainment with a total of 16 matches.

The following matches have been confirmed officially –